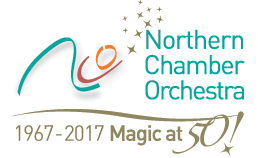 Gwilym will be joining forces with the Northern Chamber Orchestra in January for two concerts featuring his music. On the 12th they will appear at the new Stoller Hall at Chetham’s School of Music in Manchester where Gwilym was a student and then on 13th at Macclesfield Heritage Centre.

“Gwilym Simcock’s prodigious creations on the piano straddle the border between classical and jazz to mesmerising effect….a stupendous improviser and a remarkable musician all round.” The Observer