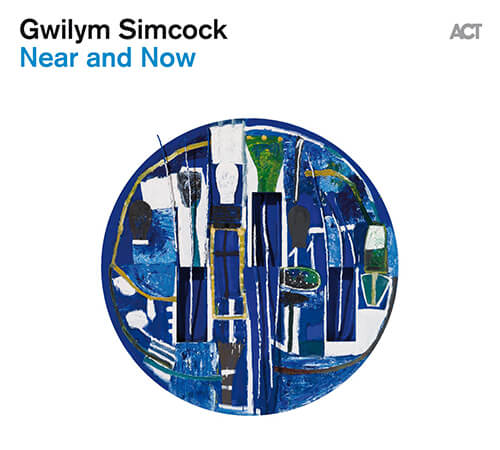 “Near and Now” is Gwilym Simcock’s second full album for solo piano. The first, the highly successful “Good Days at Schloss Elmau” from 2011, was his ACT debut. That early album was nominated for the Mercury Prize and was an important step in establishing the Welsh-born pianist’s reputation internationally. It has also stood the test of time, a fact which is at least in part due to the strong architectural sense that Simcock always brings to his work as both composer and improviser. As he says: “I have always enjoyed the challenge to make sure that a piece of music has a satisfying arc to it  – it should take you on a journey whether it is composed or improvised.” As the Daily Telegraph’s Ivan Hewett’s wrote of “Elmau” at the time: “Simcock has a feeling for the way harmony can create architecture as well as momentary colours – a rare gift.”

Simcock’s talent was singled out as special in his early twenties, most notably by Chick Corea: “Gwilym’s an original. A creative genius.” In 2006 he achieved a unique distinction when he became the first ever jazz musician to be invited to join the BBC’s prestigious New Generation Artists scheme. In more recent times, since May 2016 he has been travelling the world as a member of Pat Metheny’s Quartet. But that high-profile involvement is just a part of the current story. Simcock is also an in-demand composer, whose recent commissions include the London Symphony Orchestra’s percussion ensemble, Sinfonia Cymru in Cardiff and a third major commission from Hamburg’s NDR Big Band.

The time while travelling the world with Metheny and his all-star quartet has been put to good use. Simcock explains: “In the last six months or so, whilst away from home, I spent my spare time writing new music for a second solo album. I actually wrote much more, but quite a few of the pieces expanded. ” In the new album, recorded at Simcock’s home in Berlin, the pianist is aiming for an “honest and personal sound,” for which he cites Keith Jarrett’s home-recorded album “The Melody At Night, With You” as a model. The instrument is a newly-acquired Steinway “B” from around 1900, completely custom-rebuilt for Simcock by the Klangmanufaktur partnership in Hamburg.

Each of the pieces on the album has another piano player as its dedicatee, and yet two things shine through consistently. First is the increasingly distinctive and individual musical personality of Simcock; and equally important is the sense of enjoyment which colours his whole music-making process: his credo about listening is above all “to know why you are enjoying something.” And playing? “To be able to make music that you know you’d want to listen to yourself.”

Each piece has a different trajectory. The first piece, in three tracks, dedicated to Billy Childs, is the one which has the most compositional input, whereas the last, a tip of the hat to Egberto Gismonti, is the most improvised, the most intent on the building of texture and atmosphere. The first part of that piece is a reverie. In the joyous epilogue to the piece, Simcock describes it as increasingly acquiring “a driving feel, but not in a virtuosic way,” a description which could also be applied to other joyous and lively episodes of the album. “Inveraray Air”, the piece for Yellowjackets pianist Russell Ferrante is an astonishing, mighty piece of organic construction, based at least in part on just one tiny four-note melodic cell. And Mehldau? An aspect of his solo playing that Simcock enjoys is “a specific rhythmic focus, quite a rocky side.”

And at the mid-point of the album, perhaps its emotional heart, is a short and beautiful ‘thank you’, which stands in contrast to the larger structures around it. Simcock has dedicated the transparently poetic “You’re My You” to his first jazz piano teacher and mentor in Manchester from the ages of 14 to 18, Les Chisnall. “He has a very warm and giving approach to music, and that spirit is what I wanted to convey,” says Simcock. Warmth and generosity are what make a happy home, and this offering, direct from Simcock’s own house has plenty of both. Plus dazzling beauty, and above all enjoyment.

This is music you want to settle down with and wallow in; which balances passages of legato introspection with more passionate moments of rhythmic vitality and appeals equally to the heart and the intellect.

a one stop visit to the remarkable style and sound of this astonishing pianist’s artistry. Jazz does not get any better than this in 2019. 5 stars *****

A pianist with vision and versatility.

As leader or sideman (never just a ‘sideman’!), Gwilym Simcock is one of the most exciting and progressive British jazz musicians of our generation. Near and Now provides an alternative glimpse – the solo pianist in private, but extending an invitation to share in his intimate creativity. For us, allowing it the space it requires is a privilege and a joy.

It is difficult not to love this music.

„Gwilym Simcock is one of the best jazz players to come out of the U.K. in recent years [and] Near and Now serves as an intimate showcase for Simcock’s musical style, which blends highly narrative compositions with vivid, exploratory improvisations.“